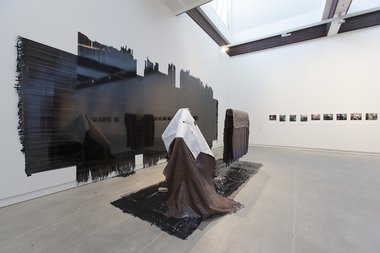 While the unwieldy curatorial process reveals itself in the somewhat fragmented results, fortunately overall the exhibition still works. Ten of the artists resonate well together and the other three are awkwardly marginalised - through no fault of their own, for differently selected works might have achieved a more cohesive integration.

In contrast to CoCA’s two previous international shows, this is an exhibition that focuses on local talent, its line up of thirteen artists being determined by a committee of five institutional curators based in Christchurch. Such procedural complexities seem to be an example of bureaucracy going haywire when the institution’s leadership has been lacking in confidence. While this unwieldy process reveals itself in the somewhat fragmented results, fortunately overall the exhibition still works. Ten of the artists resonate well together and the other three are awkwardly marginalised - through no fault of their own, for differently selected works might have achieved a more cohesive integration.

Never mind. This show has a lot going for it - even though I’m speaking as a visiting Aucklander who has not already seen most of these works. Iti, Fitts, Greenbank, Oram, Humphries, Rhodes, Hood, Flanagan, Carr and de Vries make up a particularly tidy group that incorporates mystery, has symbolic layering - with wit - and enjoys materiality. Wells, Palmer and Veling, however, are conceptually in a pocket out on their own. Their work is more intense emotionally, tends to be autobiographical (often involving community trauma: the result of property damage by earthquake, and /or a subsequently overgrown revered artist’s garden; or the death of a beloved father), is less (physically) material-focussed and has an obvious narrative. They look out of place.

Scott Flanagan‘s contribution, dominant in the upstairs gallery on the end wall, is a ‘painting’ behind a ‘sculpture’, both consisting of woven oblongs made of miles of shining audio and video tape - of different tones in brown, and different widths. These are pinned up on the floor, draped over cardboard cores, or laid on the floor like mats. You speculate about the sounds and images recorded on the glistening ribbons, the unexperienced noises and hidden movements documented in the crisscrossing bands, and the unrelenting obsessive energy needed to construct the whole thing.

Just as appealing in its sheer brazen nuttiness is the Rob Hood sculpture downstairs, a cunning assemblage where a toppled running fan leans against a volcanic rock pinioning down a sack barrow wearing a blue labcoat. (It seems to reference Don Driver’s Three Ladders, 1981.) Interpretative possibilities include the vertical barrow being an observing geologist and the fan, the (lava) cooling winds of time.

The Pauline Rhodes installation, with its dramatic bundle of dried matakoura at one end and marching propped-up rods (tipped with crimson wool) advancing towards it, is a treat where Rhodes takes advantage of the low stud, hugging the floor and showing her experience in any situ situation, no matter how extreme or unpredictable the wall height.

Emma Fitts‘ group of hangings are the opposite, being suspended from the high ceiling, mostly coming in pairs with grass mats. Celebrating diaphanous and opaque materials, while keeping the hanging shapes intact, and sometimes cutting into dressmaking patterns or folded over, her tonally controlled and dramatically imposing banners salute the contribution of Olivia Spencer-Bower to Canterbury landscape painting and social networking.

James Oram, in this show, comes across as Canterbury’s Nick Austin, with his amusing paintings and video, yet the work is consistent with Oram’s earlier sculpture and installation. Playing with the motifs of elongated ceramic fingers (shaped like wakas), flapping jean pockets, furrowed brows and exposed brains, Oram’s droll wit sets a high benchmark for this show. It is enigmatic and funny, and you keep on returning for another look - especially to the more baffling items.

Oram’s imagery locks in nicely with the larger de Vries paintings on the floor above it. Both have a puzzle or rebus-like quality, though de Fries is more mentally opaque and physically more imposing - using ambiguous images of plumbing taken from comics, sometimes with angular slivers and using linen or clear plastic, and referencing the manual processes of painting production.

Steve Carr’s videos are obvious crowd-pleasers, mesmerising and amusing yet suspenseful images - and rich in ambiguous interpretation, but I’m surprised he didn’t contribute some sculpture to help his (initially Auckland) practice mingle more overtly within the physicality of this Canterbury context.

Looking at the leather, wood and embroidered totem poles constructed by Jacquelyn Greenbank, they initially seem part of the genre of artists like Rohan Wealleans and Matthew Cowan, pertaining to a mock primitivism/ tribalism and search for the sacred. However the ubiquitous elements of traditionally female handicraft possibly link it more in this show to the flowing two sided banners of Emma Fitts, positioned upstairs.

Nina Oberg Humphries‘ Cook Island portraits feature not only photographs of posed family members, but also their carefully chosen clothing, the works’ intricately carved or cast (and colourful) frames and the barkcloth patterns on the wall behind. Rich in symbolic figurative content these images seem a natural precursor to her more recent films.

Ana Iti‘s spoken language (and carved text) piece has something in common with Ruth Buchanan, but instead of focussing on syntactical and diagrammatic codes, it examines the naming of Christchurch by both Māori and European communities, looking at the histories of the three chosen names and exploring a little inventive shuffling, so that her own incorporated surname and identity is wittily showcased.

This is a dense show worthy of repeated visits, especially if you focus on the ten artists I’ve mentioned. Although it might be counterargued that I am being too picky - that Daegan Wells mines a similar area as Emma Fitts, Louise Palmer as the architectural interests of Rob Hood, and Tim Veling as the portraiture of Nina Oberg Humphries - I’m claiming that the mood and tone is very different. Visit the exhibition and see if you agree.